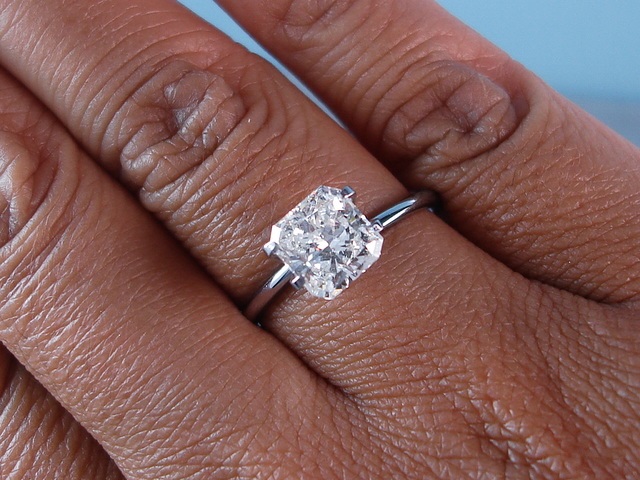 I went online and found a couple of diamonds that were being offered for sale…. I copied the diamond grading reports and I’ll use them here to give you an example of how to look at the information.

The most noticeable item on this diamond grading report is the girdle…. A VERY Thick girdle! There is only one reason a modern Round Brilliant Cut diamond would ever have a girdle like that…. weight retention from the diamond rough, a diamond with love handles!

I’m sure that the diamond cutter was trying to see if they could get it up to that “magic” 0.75ct. threshold but it didn’t quite make it. They faceted the girdle to help camouflage the extreme thickness. If this stone had been cut to a medium girdle it would have been around 0.68ct. which is down in the next pricing group.

The other items seem acceptable…. an SI2 can be good or bad (good if it is at the upper range of the grade- at almost a SI1… bad if it at the bottom of the range- almost an I1), the crown angle is a bit shallow, the polish is only a Good.

This would not be a good stone to buy online but if a local jeweler had it and you’d be able to see it with your own eyes it might represent a bargain…. that is, if the jeweler had bought it for the proper pricing and is passing that better price on to you.

I found another diamond and its diamond grading report that on the surface looks interesting but there are a couple of problems.

The report is dated March 2004, a bit old…. was it a diamond that was traded into the jeweler? Because the diamond had a thin girdle at the time it was graded in 2004, has the diamond gotten chipped along the girdle over the years?

When I was sourcing diamonds for my customers, I used to be offered diamonds at unusually good prices and when I saw that the diamond had a diamond grading report issued from an overseas lab especially EGL-Israel, I always passed on the deal. This is because EGL is a grading lab that have no proper grading standards.

Is there something else wrong with this diamond grading report? I’m not sure. I’d insist that the diamond be sent to GIA or AGS before I’d consider buying it.